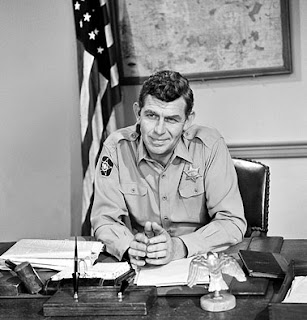 There’s a song that Rascal Flatts sang several years ago called “Mayberry”. It’s about the good old days when things were simpler.  It’s also a throwback to The Andy Griffith Show, which is a show I watch regularly on Netflix. I was watching it the other day and it was about a hobo who came to Mayberry and was a bad influence on Sheriff Andy Taylor’s son, Opie. (Season 2, Episode 6: “Opie’s Hobo Friend”).   When Sheriff confronted the hobo about his influence on Opie, here’s how the conversation went:

Sheriff Andy: “Seems to be something wrong with his (Opie’s) thinking. He’s gotten a little twisted lately – like being able to tell the difference between right and wrong. It’s especially difficult for a youngster because things rub off on them so easily. “

Hobo: “I see things differently than most people. I live by my wits, bending the law now and then to keep the clothes on my back and food in my stomach. Who’s to say that the boy (Opie) will be happier living your way than mine? How about letting him decide for himself?”

Sheriff Andy: “It doesn’t work that way. You can’t let a young one decide for himself because he’ll grab at the first flashy thing with shiny ribbons on it. By the time he realizes that there’s a hook in it, it’s too late. Wrong ideas come packaged with so much glitter, that it’s hard to convince them that other things might be better in the long run.  All a parent can do is to say, ‘Wait. Trust me. And try to keep temptation away.’”

This show was aired in the early 1960’s and it’s still very relevant today when it comes to right and wrong. Parents are still responsible for their children’s behavior and need to be careful what their kids are being influenced by.

One of the phrases that I constantly teach children is “You reap what you sow”. Most kids have no idea what that means. I get out my Bible and show them that it’s in Galatians 6:7 “Do not be deceived, God is not mocked; for whatever a man sows, this he will also reap.” I explain what sowing and reaping is, then talk about my garden. I plant okra seeds every summer and only okra comes up. Corn or bell peppers don’t grow out of okra seeds. Whatever seeds I sow, reaps whatever seeds I plant.

If children think that lying is acceptable, I tell them that if they continually plant seeds of deception (lying) when they are young, then they will reap deception when they are older. A business partner might steal from them, their children might end up lying to them, or their spouse might have an affair. When that happens, they may be asking, “Why is this happening to me?” I tell them to remember what I said about reaping and sowing and they will have their answer.

So many people today think that the Bible is an antiquated book and that it isn’t relevant anymore. However, “…the grass withers, the flower fades, but the Word of our God stands forever.” (Isaiah 40:8)  The Bible is as relevant today as it was when it was written.  Read it sometime and you’ll see.