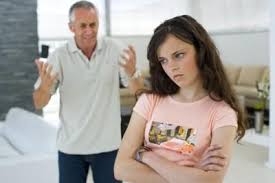 “Parents teach their children to lie by the way they react to the truth.”

When parents complain to me that their children often lie to them, I say it’s probably because they’ve taught them to lie. These parents look at me like I’m crazy when I say that. But it’s true. Children are taught to lie by the way some parents react to the truth.

It starts when they are little. Your toddler comes into the room with chocolate stains on his mouth. You ask him if he ate a cookie (that he wasn’t supposed to eat). He tells the truth and says “yes”. Then you over react and punish him, instead of calmly explaining that he disobeyed and won’t get a cookie after dinner (or some gentler consequence).  Your over reaction leads him to think, “That wasn’t the correct answer. Next time, I’ll say ‘no’.”

Children are constantly looking to their parents for guidance, so when they initially are honest yet still get in major trouble, they learn that honesty doesn’t work. Parents need to remember to model good behavior and reasonable consequences for their kids. When parents start responding calmer to truth when their kids are small, eventually those kids grow up to trust their parents with hard things and to be more honest as teenagers. When there is no trust, teens turn to their friends instead for guidance.

When asked a difficult question that kids would normally lie about, I teach them to say to their parents (instead of lying): “I don’t want to tell you”, or “I’m afraid to tell you.” This is a huge signal to their parents that they want to stop lying and be truthful . I also ask kids to come to their parents initially with: “There’s something I need to tell you that you’re not going to like.” The tough part now rests on the parents. As parents, you have to let your child know that no matter what they say next, you will remain calm and not over react. (If you have to go to another room to calm down, then do so. It’s better than yelling at your child.)

Next, parents need to let their child talk and explain what happened. Do not interrupt them, but show a genuine interest in what they are saying. The important part comes with two crucial questions that every parent wants to know:

Usually your child will answer these two questions truthfully and will have learned a valuable lesson from whatever happened. However, if they are flippant and don’t seem to have learned anything, a consequence might need to be implemented to teach them not to do this again.

Truth doesn’t always need to result in punishment. If your child makes a mistake that results in a negative consequence, chances are your child has already learned his lesson. So to come behind this lesson with a harsh punishment will only cause your child to resent you for being ‘mean’. A good example of this is the classroom. When kids get in trouble at school, they have already had their punishment by the time they get home. If it’s a one-time incident, you probably do not need to re-punish; however, if it is a repeated behavior that constantly gets your child in trouble, you have a deeper issue that may need to be addressed in counseling.

As a parent, a good rule of thumb is “Remain Unshockable”. Remember, the teenage years are a test run for adulthood. Prepare for the worst when they come to you as teens with their problems, but respond with love and understanding. This will build their trust in you and they will be more likely to come to you again in the future.

Posted by Unknown at 8:25 PM No comments: