Pretend:  To make believe; to imagine and act out.  This is a word that many children don’t get to hear anymore.  A few weeks ago I found myself saying this word to a four year old boy as I was verbally tracking him in the playroom.  He has had a pretty tough life.  Mom and dad are divorced and he’s an only child caught in the middle of their feuding.  He looks forward to coming to play with me.  On this particular day, he was sitting in front of the miniature house as he moved the family members up and down the stairs.  He found a tiny popcorn box and said he was going to eat some popcorn. I told him that I loved to pretend to eat popcorn. He moved to the kitchen and started to ‘cook’.  I told him to be careful not to ‘burn’ himself on the stove.  He was having so much fun as he pretended to cook some food.  As he came up with ideas, I would go along with them as I joined him in his pretend world.  The smile on his face warmed my heart.

A few years ago I had another small boy come into the playroom.  He looked around for a bit, then he asked me where my TV was.  I told him, “In here, we use something called our imagination.”  He replied, “Aw man, this is boring.” He was disappointed because all he knew to play with were his electronic gadgets.  After about 5 minutes, his imagination kicked in and he pretended to be a big monster. He put his feet into the large monster slippers and put on the monster gloves.  After finding a monster mask and adding a hat, he was having the time of his life.  From then on, he never again asked about anything electronic.  He had learned how to pretend. 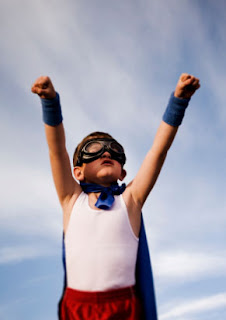 Children need to have times when they are allowed to pretend and create the world they want.  This is what they are able to do when they attend play therapy.  When the world they live in is upsetting for them, they can come and create a make believe world where everything is better, where everyone gets along, where they are powerful, where they can protect themselves with toy swords, and where they can enjoy some relaxing play with an adult who spends the entire time focused on them.

If you have the privilege of being around children, don’t forget how to pretend with them.  It will totally make your day.
Posted by Unknown at 9:00 AM